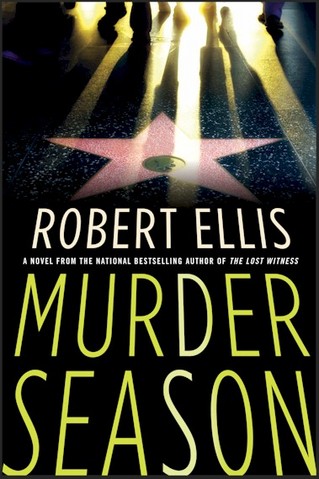 She could smell it in the pillow as she pulled it closer. On the sheets as she rolled over in the darkness and searched out cool spots that were not there.

She was floating, drifting. Cruising through an open seam between sleep and consciousness.

She glanced at the clock radio but didn’t really see it, then fell back into the stream and let go. It was somewhere after midnight, sometime before dawn. Early spring, and the air inside the house was already deadened from the oppressive heat. A steep, lifeless desert wave had swelled over Los Angeles two days ago, pushing the marine layer and the cool breezes out over the ocean where they could be burned up and erased without a witness.

The city that was left behind felt dusty and canned in. Vacuum packed. The air perfumed with spent diesel fuel and gasoline.

Murder season would come early this year. It would roll in with the heat like they were best friends. Lovers.

She had spent the night on the terrace drinking ice-cold Irish reds with Stan Rhodes and Tito Sanchez. Sanchez had brought over a flank steak, marinating the meat, and working the grill with mesquite the way his grandmother had taught him. After dinner they sat on the stone wall and gazed down the hill, the lights of the city caught in the dust and glowing like cotton balls from downtown all the way across the basin to the Pacific. They laughed and told stories in the eerie light, opened fresh bottles, and talked shop. Rhodes and Sanchez were deep in on a new murder case and had worked the last forty-eight hours straight out. Both detectives needed to regroup and get some sleep. Lena had tomorrow off and could afford to relax, maybe even get buzzed. When they left around ten, she popped open the last bottle of ale, stripped off her clothes, and slipped into the pool.

Murder season. Trouble ahead. When the streets get hot, business burns.

She rolled onto her back, her mind cutting a jagged path to the surface. She could hear something going on in the house—something in the background behind her thoughts. A noise pulsing through the still air. She tried to ignore it, fight it. Tried to pretend that it wasn’t real. After a while, she wondered if it wasn’t part of her dream, a noise in the darkness breaking up her sleep.

Until she finally realized that it was her cell.

She opened her eyes and saw the light glowing from her phone. She grabbed it, recognized the caller, and slid open the lock on the touch screen. It was her supervisor, Lt. Frank Barrera, Robbery-Homicide Division. She didn’t need to guess what he wanted. She checked the clock and read it this time: 2:54 a.m.

Murder season. The train was rolling in.

“I’m good. What’s up? What’s that noise in the background?”

She turned and looked out the window. Sirens. She could hear them in the distance, and she could hear them over the phone. She made the match—Barrera was close. He was in the neighborhood. She tried to look down the hill and thought she could see flashing lights. Something was going on just west of the Capitol Records Building.

His voice broke. Barrera’s usual demeanor—steady as she goes—had become tainted with fear.

“We’ve got two dead bodies in Hollywood. That’s all I can say over the phone.”

His voice cut off like he needed to catch his breath. Most homicides in Los Angeles were handled by investigators at the local level. For a murder to bounce up to RHD, the crime had to involve a high profile victim or be particularly horrific. For a Homicide Special detective to get the call with a crime scene still open, it had to be more than that. Some unlucky combination of the two.

Lena switched on the light, feeling the rush of adrenaline eat up whatever alcohol remained in her blood. She still didn’t have a partner and wouldn’t until the fall.

“Orders from Deputy Chief Ramsey. You’ll know why when you get here.”

Ramsey was one of the few members of the old guard who had survived the department’s reorganization. He reported directly to Chief Logan, and had become his trusted right hand. His fixer. She knew that Chief Logan had left the city on a ten-day recruiting tour for the Scientific Investigation Division. With the success of the CSI franchise on television, the line of students wanting to become the real thing was a long one. Logan was offering better than decent money and the chance to move to L.A. He knew that he would have his pick of the best and brightest. He also knew that SID had taken a big hit recently and the division needed the fire that came with new blood.

“You ever hear of a place in Hollywood called Club 3 AM?”

Lena glanced at her .45 on the night table as Barrera gave her the address. She didn’t bother writing it down. Everyone in L.A. knew about Club 3 AM. It had become a celebrity hangout. A private nightclub catering to the A-list.

Murder season. It had come early this year.