Film  vs. Fiction, The Complete Interview

In City of Fire (Reviews, Apr. 16), Robert Ellis introduces Lena Gamble, a young Los Angeles detective who works her first big murder case against the backdrop of the literal and metaphorical fog of a forest fire.

You began your writing career in film and television. What inspired you to move to novels?

I love crime fiction. Pure and simple. I believe that the crime novel is defining the modern American myth. And right now there seems to be a true renaissance in the genre. More than a handful of authors who are reshaping the way stories are told. But there are a lot of great writers working in film and television as well. A lot of really smart people. So I think for me, the big inspiration comes from the differences between the mediums. Writing and reading novels is still the closest thing to real experience because we're inside the character's head. In City of Fire the main character is Lena Gamble, a young detective working her first big murder case. It's a horrific murder case. A real challenge. No matter what the medium we can see what she is doing. But because it's a book we know what she thinks, believes and guesses. Because it's a book we can peel the layers of experience away until we get to her fears and doubts and know how fast her heart is beating. In a novel the connection seems almost primordial. And I'm not just talking about the hero. How many times have you heard an actor talk about how great it was to play a really bad, bad guy? Let me tell you something. It's a million times greater writing one. Writing a novel is a very special kind of storytelling because of the close connection between the writer's imagination and the reader's. Between the writer and his or her characters. And that's where I think the deep sense of satisfaction comes from. I've moved to novels because I love them.

Do you feel there are advantages to films over novels?

The key to a great film is a great story. The actors could be magnificent, the photography, awe inspiring, the director, a total genius. But if the story structure sucks, none of that matters. The finished film is a complete disaster. What's so amazing about films is that you can see it. You can feel it. The push of story. You know when it's working and when it's circling the drain. And that's why I think every writer, no matter what medium he or she is working in, must be a student of film at least at some level. Films and stories work hand and hand. And there is nothing quite like watching a movie that's on a real roll.

Are novels more difficult to break down?

At least for me they are. You have the story structure, but you have the tone and cadence of the writer's words. A character's thoughts and actions. There's a certain balance here. All three have to work seamlessly if you're going to tell a story that resonates. What fascinates me is that some of the most important works in crime fiction required the least amount of effort to bring them to the screen. Two great examples would be Dashiell Hammett's The Maltese Falcon, and Thomas Harris's The Silence of the Lambs. Hammett's book was so structurally tight that John Houston didn't do anything more than retype the book in screenplay form. Harris's story is just as remarkable, a direct translation from page to screen. In both cases, the novels are masterpieces. In both cases, so are the films!

Your writing is very cinematic. Are your books potential movies?

I'd like to think my stories are tight enough to work on the screen. I certainly think that the characters have the depth to pull it off. But I have to admit that I spend as much or more time working on how I'm going to write the story as I do with where the story is going. I think this gets back to the key differences between a book and a film. A novel is a complete experience. A screenplay is more like a blueprint of a complete experience. An experience in waiting. Because I'm trying to create a complete experience, I want it to be a visual experience. But I also want to involve as many senses as I can. In City of Fire Detective Lena Gamble has a weakness for good coffee. Piping hot coffee. There's no question that I want readers to see the steam rising from her cup. But I also want them to taste the coffee, maybe even burn their lips! On an emotional level, when Lena's under the gun and in dire straits -- I want readers to feel like they're in the same room with her. That the ordeal she's going through is so horrific it cuts to the bone.

You live part time in Los Angeles, and the city is truly a character in your new novel. Did Philadelphia (The Dead Room) and Washington, D.C. (Access to Power) play similar roles in your earlier books?

Los Angeles has a pulse like no other city I've ever lived in. Maybe it's because the city is so vulnerable. So beautiful. Bringing LA to life in City of Fire was something I really enjoyed doing. The Dead Room is set in Philadelphia for a variety of reasons. First and foremost, the book was written for my father, who turned me onto Thomas Harris's Red Dragon. I grew up west of the city, less than a mile from where the hero, Teddy Mack, lived. But I also chose to set the novel in Philadelphia because of the city's close relationship to law and art. Philadelphia is a lawyer's town, but also an artist's. And I tried to integrate this feeling into what became a very frightening story. With Access to Power the climax of the novel actually occurs on the dome of the U.S. Capitol. When I was researching the story, I talked a member of congress into taking me all the way to the top so I could feel how hard the climb might be. In the end, I think you're right. Locations can often become so important, they feel like characters and add to the thrill of the chase.

Would you consider creating a series some time in the future?

City of Fire is the first of three books set in Los Angeles that will feature Detective Lena Gamble. There could be more because I'm not really planning any of this. All I can say is that something profound happened to me as I wrote this book. And it happened fast. It happened the moment I

met her in the first paragraph of Chapter 2. Detective Lena Gamble is a

very special character. I've never run into anyone like her before. She's strong, but still vulnerable and very real. I'd like to see where it all goes. 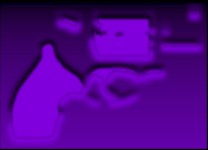