An Essay by Robert Ellis for Mystery Readers Journal

L.A. IN A HEARTBEAT

It’s got a pulse to it. A heartbeat.

Not any of the bodies LAPD detective Lena Gamble finds in my new crime novel, The Lost Witness. Instead, I’m thinking about the City of Angels. There’s a kick to the place. A certain vibe. Something I could feel the moment I moved here. And I love it. The traffic, the smog. The summer heat that burns so dry it sends chills up your spine. The high-profile trials and the media circus that goes with them. That guy from Beverly Hills who blew snow all over his house so his kids could have a white Christmas in the hot sun.

I love the insanity. The whole package. The way none of the pieces to this real-life puzzle were ever made to fit.

The Lost Witness is set in this world, and it’s a story about a young woman with a horrific problem. She needs help from the system and she’s not going to get it. Instead, it’s murder – the big fall – and she winds up in the trash behind a dive bar in Hollywood.

Enter Homicide Special detective Lena Gamble from the LAPD. This is Gamble’s first case since City of Fire, and the cards aren’t just stacked against her from the first page. There aren’t any cards. The victim has no identification. There are no apparent witnesses. Not a single clue. And just to dial up more trouble – Lena has been warned by her supervisor that she’s probably walking into a trap designed by LAPD brass to get rid of her.

So Lena Gamble works this impossible murder case with the stakes jacked up to the moon. Everything she sees looks exactly the way the killer wants it to look. One lead after the next reveals a city overwrought with political corruption and corporate greed. It feels timely. It feels explosive. It feels like now. And then, in the blink of an eye, Lena discovers something no one could have imagined ...

The Lost Witness ... I love this novel – it runs white-hot. And I love the city this story is set in.

I have friends who claim that they can feel the edge living in New York City. I believe them. The two cities share many of the same themes ... People coming from another place, another culture or even time, chasing their hopes and dreams. Beating the streets. Winning and losing and holding on for the ride. Maybe it comes down to where you came from. Where the race began and what you brought with you. And just maybe it’s also about how frail both cities are in this world we find ourselves in. The world we call today.

I’m sitting in a café just north of the Sepulveda Pass. The sun set a half hour ago, and I can see the Santa Monica Mountains slumbering in the darkness. The white headlights and red brake lights from all the cars moving up and down the 405. There are so many cars that their lights congeal and look like a lava flow streaming down the mountain side.

The sight inspires awe. It’s beautiful, yet horrific. The sheer number of people feeding through the pass. A line that appears endless. As long as you don’t have to be anywhere, L.A. is a great place to live.

My cell phone rings. It’s Rick Jackson. While I’m waiting on the traffic, he’s at an airport on the east coast heading for New Orleans. Rick is a veteran homicide detective – one of the very best – working out of the cold case unit here in L.A. He’s been on the hunt all year, punching out air miles, closing in on a murder suspect who’s running out of time. Tonight Rick’s calling with news. Not about the case, but about Detective Lena Gamble. He has her phone number, and he won’t let anyone else have it. We laugh. It’s become a joke since The Lost Witness book tour. The first thing readers said from one bookstore to the next. Women want to be Lena, guys want her phone number. We laugh again because it’s a joke. Or is it?

Most people can think back and spot the moments in their life when they changed direction and started on a new course. For me, one of those early moments came as a student when I managed the kitchen at a nightclub called The Main Point in Bryn Mawr. That’s where many of the first cracks began to appear in the status quo world I was born in. That’s where I met Muddy Waters and Larry Coryell. Spent a little time with Chick Corea and Al DiMeola. And that’s why Lena Gamble listens to music in my novels. Why her brother played guitar. I played music, but was much better at listening. Along the way, I met a character or two.

But this is also how I relate to plot in my thrillers.

The Lost Witness book tour opened with starred reviews from Publishers Weekly and Booklist. The gist of the reviews mirrored the wonderful reviews Gamble’s first murder case in City of Fire received. They talk about plotting and character and doing both at the same time. They talk about the way my stories move.

My crime novels work like roller coasters, making the climb up that first big hill with Lena Gamble and Stan Rhodes in the driver’s seat. As the detectives put the murder case together, we gain confidence and think that we have a handle on the story. And then something wonderful happens. We plunge down the hill and take the shock that nothing is what it appears to be. The Lost Witness works like a controlled crash, filled with one pop after the next and a big finish that seems to make everyone smile as much as I did.

And the way I do it is with character. I put people together. A wide variety of people who are often times outrageous. Once I have a handle on their hopes and dreams, I let go and let the story ride. Let it crash and explode. I can’t be sure, but I think this comes from the people I’ve met who don’t really fit anywhere other than where they are. That crime novels are less about action and more about what characters discover – the more discovery, the faster the thing goes.

I take another hit of coffee and gaze out the window. That stream of lava flowing down the 405 really is endless. I remember reading somewhere that more than a quarter million cars drive through the pass every single day. Tonight it looks like they all came out at the same time. It looks like a party.

Getting home will be a grind.

While I wait it out my thoughts return to Lena Gamble working her next case somewhere in Los Angeles. Some of the characters who surrounded her in The Lost Witness. Vinny Bing the Cadillac King, who sells cars, hosts a TV show on cable, but deals with people like the grifter that he is. Nathan G. Cava, a professional hit man who isn’t exactly a professional, and lights up every chapter he’s in. And then there’s Stan Rhodes, a homicide detective who works with Gamble, keeps things grounded and has become her trusted friend.

Could any of these characters live anywhere else?

I don’t think so. They’ve got it their blood. The wildfires and the earthquakes. The searing heat and torrential rains. That feeling that a big score is just over the next hill. That the void is closer than you think. That survival here means learning how to scramble and do the dance. That anything can happen here and often does.

L.A. in a Heartbeat, The Lost Witness 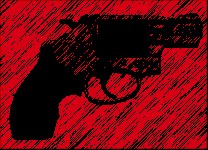